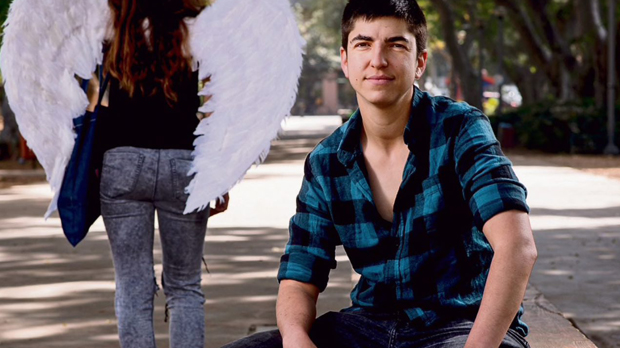 Lee Arnan was on the way from work to his Neveh Tzedek (a Tel Aviv neighborhood) home when a group of boys began harassing him. “Are you a man or a woman?” They asked again and again, and when they didn’t get an answer, they grabbed him and pulled down his pants. Only then, when they seemed to have received an answer to their intrusive, disturbing, illegitimate question for they were total strangers, they left him alone. 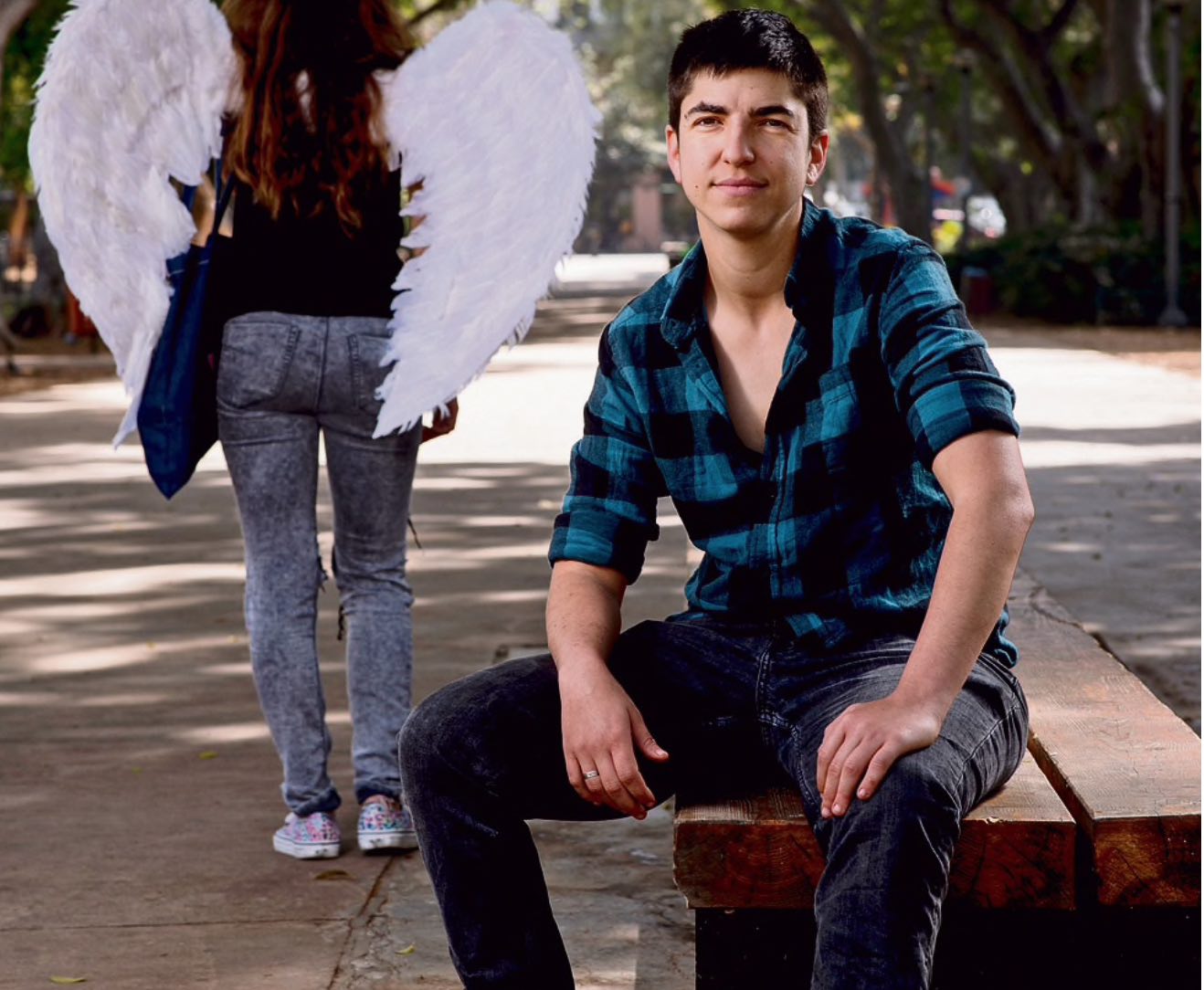 This horrific experience is extreme, but, says Arnan, is not surprising. The violence, both verbal and physical, has become part of his daily life, and with the fear of being murdered out of transphobia he has somehow learned to live. It just exists out there on the streets, he explains. Yes, even in Tel Aviv, and yes, even in 2018.

Lee was born 27 years ago as a girl, and today Arnan defines himself as non-binary, meaning that he doesn’t feel a complete identity with any of the genders. At his request, I’ll refer to his gender in this article interchangeably.

In the past three years he’s been living with his wife in Tel Aviv, after serving as an army commander in IDF’s Bahad 1. He’s currently studying history and literature in the Faculty of Humanities at Kibbutzim College. Her dream, she says, is to be an educator. “To see the children and to be attentive to them.”

“Even though I was born a girl, I was never interested in girls’ things or what was socially perceived as girls’ things,” he says. “I loved being with friends, walking, and mostly being on the computer. Clothes and makeup seemed boring to me, and I lived in isolation from my body, I felt that it was just meat. At some point I asked my amazing mother to buy me men’s clothes, especially because I couldn’t relate to the cleavage and to women’s clothing designs that shapes the body in a very specific way, and she cooperated. It was never an issue between us, she allowed me to choose. ”

At the age of 17, Arnan took the stage for the first time as a drag king. She tied her breasts, pushed a sock into her pants and drew a scruffy beard on her face. “I looked at myself in a mirror,” he says, “and for the first time I felt like I could look like that and it’s not bad.”

How does a ‘good girl Jerusalem’ find herself in a drag king show?

“I had a trans friend and a gay friend, so I knew this world through them. I was in LGBTQ events and parties and I was comfortable with the liberation from gender that our community allows. After all, even before the issue of attraction and sexual preference, what bothers the normative society first and foremost is our appeal on gender. I became an activist in the Jerusalem Open House, I met friends like me and it was great to be there. But even there, the transgender world I got familiar with was also binary – biologic males who felt they were female and vice versa. As opposed to them, I didn’t feel like I would like to identify as a woman, nor as a man. At some point, it was convenient for me to stretch the boundaries of the concept and as a teenage I identified as butch – a political identity in the lesbian world that includes a choice of non-aggressive male appearance and expression.”

But that society, as usual, made it difficult for her. In a world that needed patterns and clung onto definitions, Arnan felt she had no place. “Society has reflected and still reflects the difficulty and the unwillingness to deal with a person who does not want a gender definition. At first it was undermining and hurtful, so I tried to dress more ‘feminine,’ but then I understood that it didn’t matter, that people recognize something different in my appearance.”

How does this manifest itself?

“The questions arise all the time, in the style of ‘What do you have between your legs?’, someone once called a security guard when I entered women’s public bathroom somewhere and had me expelled from there, shouting behind me ‘deviants like you should not be here.’ At another time I got yelled at when I went to try on bras in a lingerie store. This happens all the time, even today. At school I try not to drink too much, because there are no public bathroom where a person like me can pee, the same goes for the gym locker room, or when I go to the gynecologist, regardless the fact that the sign says ‘women’s clinic’ which is not for me to begin with, but when I go in I get asked what do I do there, because at first glance I look masculine.”

It’s important to mention, that following the interview with Yedioth Ahronoth, the management of the Kibbutzim College of Education announced the launch of an all-gender bathroom on campus. This is done in an attempt to take Arnan’s needs into account and to raise the issue with the faculty and the teachers.

Arnan adopted the non-binary identity only a year and a half ago, and after the surgery to remove the breasts. “Since the drag show, I began to bind my breasts, then I bought special binders that of course can not be obtained in Israel,” she says. “The breasts to me was two bags of meat that had nothing to do with me, and with the binding I felt that my appearance seemed more like who I am. The surgery was a natural continuation to that. What is considered feminine, like dresses, earrings, nail polish, puts me in a state of stress, a real distress, regardless of the fact that I am a feminist and I admire women.”

Arnan is currently considering hormonal therapy that will strengthen his male appearance, such as growing a beard.

Why are you doing this if you don’t feel you’re a man?

“Because of the violence I absorb on the street, because of the constant fear of getting hurt, and also because of thinking of the future. We live in a gender-defying society, and I understand that in the future, when I look for a job, I will have to disguise one side of me, and it will be easier for me to appear like a male. I want to be a teacher, and it’s clear to me that when I enter the classroom – my visibility is the first thing that will speak. People see me and immediately a question mark pops up, so the hormones, if I end up deciding to take them, will actually be a kind of defense from society. I can’t straggle for my place anymore, I want to be less scared, I want that people will stop commenting, let go of the discussion of what I have between my legs. Unfortunately, this involves some sort of surrender to social dictates.”

Arnan, who would probably be the first non-binary teacher in Israel, is not afraid of the questions his students would probably ask – and probably their parents as well. He intends to discuss his gender identity in every classroom to which he will enter and be there for the students. For all of them, regardless of sex or gender.

“I was a commander in the army and I saw how significant this was for me, and I discovered my abilities to stand in front of an audience, to train, to identify distress and help,” he says. “As a student, nobody paid any attention to me, not even when I cut myself, trying to commit suicide. I was a freak, there were rumors about me that I was eating cats in my free time, that I was in a cult. I once wrote a poem about my loneliness and threw it into the trash in the classroom. One of the children found it and wisely brought it to the counselor. I was called to talk to her, she promised there would be more conversations, but that was it. Nothing happened. I remember teachers gossiping about me behind my back but not a single teacher who looked me in the eye and asked what was happening. Today I understand that I was trying to get their attention in different ways, I would initiate fainting and stuff like that. Fortunately, young people today have the Internet, which creates the possibility to get to know other things, to identify, to understand that you are not alone, that there are others like you. But that’s not enough, because we’re looking for a role model and need it in the real world: at the neighborhood cafe, at the clinic, at school. That’s why it’s important for me to become a teacher, to educate. It’s dealing with human life, it’s an important mission. I will bring the total of my identities into the class, but I will not be at the center– the students will. Because gender shapes my life in a dominant way, I can relate to the gender balance, to allow my students to find their place, to give their voices an expression.”

What will you tell parents who express their fear that you are confusing their children?

“It’s clear to me that parents will be upset and say that my presence undermines the children’s gender identities, and I’ll explain to them that it can’t be true. I will not change anyone’s self-perception on gender, I will only open a door to complexity. What is preferable? an abnormal teacher who will be there for the children and strengthen them, or a normative teacher who will not be able to identify distress? I promise in advance that because nobody paid any attention to me as a student, I will pay more attention to the students than many other