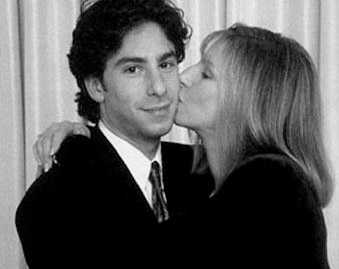 On the opening night of her Back to Brooklyn tour, Barbra Streisand brought up gay son Jason Gould to sing ‘How Deep Is the Ocean’ as a duet with her. Babs and Jason got to spend some quality time in front of a few thousand fans, and one of them did us a huge favor and got it all on camera.

In a mother-son moment that could have played out similarly in any household, prior to the song Streisand attempted to tell the audience about overhearing her son sing in his bedroom while he was a teenager. He tried to stop the story, seeming embarrassed. Watch it below.

Barbra Streisand has done some pretty dazzling duets in her time with the likes of Judy Garland, Neil Diamond, Donna Summer, Tony Bennett and Celine Dion, among others, but her latest duet partner is definitely much closer to her heart. After the duet, Streisand said: “Is that unbelievable? It’s just just because I’m his mom!”

Gould, 45, is openly gay and performed in films (Boys Life 3, Say Anything) and on stage (Twilight of the Golds) although not in the past decade. His father is actor Elliot Gould who was Streisand’s first husband.

One thought on “Barbra Streisand Duets With Gay Son”