The Chicago Dyke March Preaches Inclusion. So Why Was I Kicked Out for Carrying a Jewish Pride Flag? 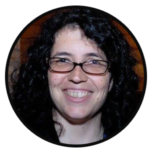 “You have to leave because you are making people feel unsafe. You are putting them in danger by being here.” I was told this by Chicago’s Dyke Collective organizers, volunteers, and even other marchers. Why? Because I was carrying a rainbow flag with a single Jewish star.

For over ten years, I have marched in Dyke March, carrying this same flag, without incident. This flag I received from my congregation, Congregation Or Chadash, which was founded over 42 years ago when the Jewish community still closed its doors to Gay, Lesbian, Bisexual, and Transgender Jews. While there is always work to be done as far as including and empowering LGBTQ Jews within Jewish spaces, the community as a whole has come a long, long way. 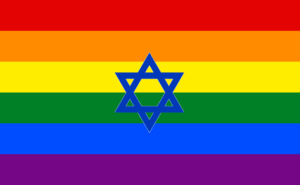 In part, by carrying this flag, it has allowed me to show the pride I carry for me and my identities, as well as my communities. “That may be what the flag means to you, but other people find it offensive. This march is a private event and you are offending the organizers of this event.”

Dyke March has taken place for over 20 years. It was done to raise awareness and empower those who identify as female, and others who felt marginalized and/or felt invisible at Chicago’s Pride Parade, among the onslaught of commercial and political candidate floats.
To drive this mission even further, ten years or so after its founding, the Dyke March itself was taken out of Andersonville, an affluent, mostly Queer friendly neighborhood on Chicago’s Northside, and transformed into a rotating march that kicked off in a different Chicago neighborhood every few years. This was done as a sign that not all LGBTQ people reside in Chicago’s Northside and that they have a right to be visible and included as well.

This was a brilliant move that made it possible for more people of diverse color, ages, gender expression, citizenship status, and economic status, to be visible and empowered. I was tremendously proud of this initiative and showed my support by continuing to take part in Dyke March event after it moved.

In every year that I marched, I carried the flag from my congregation unhindered. Several people even took pictures either with me, or holding my flag, because they were so happy to see it and proudly proclaimed their Jewish Pride and/or solidarity on the spot. This year, there was some of that, but it was attached to a much more disturbing message.

“Thank you for marching,” said more than one Jewish marcher. “I’ve felt unsafe in the past.” They were there because, like me, felt a strong connection with Dyke March Chicago, yet felt they had to hide their Judaism. Furthermore, as this continues to pour out in social media, other Queer Jewish activists are sharing stories of have been excluded, or how they decided to avoid the march for this reason.

How can this be called a Chicago Dyke March if local Dykes are made to feel unwelcomed and unsafe, be they at the march or in spirit?
Jewish members of the Dyke Collective, or those who were Jewish and said they were speaking on behalf of the March organizers, said I had to leave because even if I saw this a Jewish Pride flag, “this is seen as an Israeli Pride Flag and offensive to others.”

But while this flag may be welcomed in Tel Aviv, people I know who marched in Jerusalem’s World Pride in 2006 from Chicago (my rabbi being one them) were publically ridiculed and shunned for carrying this exact same flag. In 2010 and 2015 marchers in Jerusalem Pride were violently attacked and in 2015 one, Shira Banki, was killed.

How is this an ‘Israeli Pride Flag’? How does use by one city, or even one country, erase what this flag means for an entire world-wide community?

“Are you a Zionist?” “This march is pro-Palestine and explicitly anti-Zionist.” Just as I did not hide my flag, I did not hide when asked point-blank, that, yes, I care about the State of Israel. Yes, I believe it does exist and that it should continue to exist. I also believe that it should continue to be held accountable and challenged by the amazing Israeli Queer LGBTQ activists I proudly call my colleagues, who struggle every day to make Israel more pluralistic, accepting and accountable not only to Queer Israelis, but everyone, including Queer/non-Queer Palestinians. In many ways, their work mirrors those of the LGBTQ activists I work with here in Chicago, both on a personal level, and within my role at A Wider Bridge.

In the same breath, I stated that I believe there should be a free and independent Palestine. I was shut down. “You cannot be Zionist and believe in a Palestinian state, Zionism is inherently racism.”
And so again, because of one belief I have that I shared when asked, because of the one symbol I carried, I was asked to leave.

“Are you asking anyone else to leave?”

“Yes, one other girl who was carrying a similar flag.”

“So you are asking the two people who are carrying Jewish Pride Flags to leave, and no one else?”

“Just you, the other girl, and the religious protestors.”

“So you are asking the two people carrying Pride flags with Jewish stars on them and the “God hates fags” contingent?”

Laurel Grauer is the Midwest Manager of A Wider Bridge, the LGBTQ organization advancing support for Israel and LGBTQ Israelis.